Topics/History/The Heresy of Orthodoxy: How Contemporary Culture's Fascination With Diversity Has Reshaped Our Understanding of Early Christianity 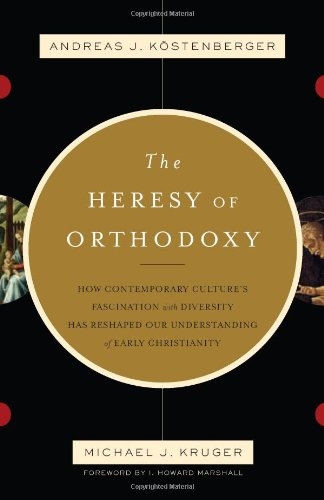 The Heresy of Orthodoxy: How Contemporary Culture's Fascination With Diversity Has Reshaped Our Understanding of Early Christianity

"Beginning with Walter Bauer in 1934, the denial of clear orthodoxy in early Christianity has shaped and largely defined modern New Testament criticism, recently given new life through the work of spokesmen like Bart Ehrman. Spreading from academia into mainstream media, the suggestion that diversity of doctrine in the early church led to many competing orthodoxies is indicative of today's postmodern relativism. Authors KÃƒÂ¶stenberger and Kruger engage Ehrman and others in this polemic against a dogged adherence to popular ideals of diversity.

KÃƒÂ¶stenberger and Kruger's accessible and careful scholarship not only counters the ""Bauer Thesis"" using its own terms, but also engages overlooked evidence from the New Testament. Their conclusions are drawn from analysis of the evidence of unity in the New Testament, the formation and closing of the canon, and the methodology and integrity of the recording and distribution of religious texts within the early church."